Stimulating the technical dialogue around issues of rehabilitation of old urban fabrics and the enhancement of railway land heritage, thus supporting the emergence of new urban projects in Algeria

The new wave of UPFI project identification in the Mediterranean, carried out in Algeria from December 2016 to December 2017, has seen the emergence of crucial issues for the urban development of the country.

As a result of this surveying, led by the AFD, and of the resumption of dialogue about urban issues with the Algerian authorities, the UPFI Steering Committee validated the funding of collaborative workshops with Algerian counterparts on the issues of rehabilitation of old urban fabrics and the enhancement of railway land heritage.

In the framework of the UPFI initiative, a second wave of urban project identification in the Mediterranean carried out by the Project Management Unit (PMU) and its complementary experts, has been launched in order to identify mature projects that meet the UPFI criteria and are likely to benefit from the initiative’s technical and financial support.

Within this framework, an identification mission took place in Algeria, leading to two field missions in April and December 2017. These missions enabled the resumption of dialogue with the Algerian authorities and to consider prospects for support and financing of projects or areas of technical cooperation on urban issues. The first mission in April 2017 assessed the new directions of urban development in Algeria and the willingness of the public authorities to integrate new concerns, particularly the challenges of urban renewal and renovation. The second field visit in December 2017 enabled the Algerian authorities to express their needs in terms of capacity building and technical dialogue on pilot sites in Algiers that each ministry proposed to the AFD.

This renewed urban project identification in Algeria is in line with Algeria’s national strategy for urban development. The strategic development plan for Greater Algiers (2015–2035) also devotes an important place to urban renewal and renovation issues, notably through projects of rehabilitation (in Algiers, the Casbah and the arches of the fisheries district, in Oran, rehabilitation projects in the colonial city centre and historic districts, etc.) and restructuring and upgrading of large urban areas (in Algiers, Hamma-Hussein Dey, etc.). In addition, the rehabilitation of old urban fabrics and the upgrading of run-down neighbourhoods is an important focus of the government’s housing, urban planning and urban policy, and as such was prominent in the 2015 strategic documents and the government’s 2015–2019 Housing Action Plan.

The two workshops made it possible to meet the expectations of the ministries, which wanted to develop a methodology to better involve private actors in the financing and implementation of projects. On the issue of enhancing railway land heritage in particular, the Ministry of Public Works and Transport is keen to attract private investors to contribute to the creation of exchange hubs with mixed office, service and commercial activities.

Collaborative workshops to define, on the basis of pilot sites, intervention methods and strategies for old urban fabrics and enhancement of railway land heritage

In December 2017, the UPFI Steering Committee, the Algerian Ministry of Housing and Urban Development, the Ministry of Transport and their respective operators agreed on the organisation of two collaborative workshops on the issue of rehabilitation of old urban fabrics and on ways to enhance the heritage of old urban railway infrastructures in Algeria.

The workshops will open the way to a technical follow-up on the two issues with the Algerian ministries and operators concerned in order to identify new related projects that can benefit from technical preparation and financing under the UPFI. Finally, the two workshops aimed to strengthen cooperation and technical dialogues between Algerian authorities and operators and their European counterparts on these two urban issues, and may contribute to the design of concrete investment projects (exchange hubs, neighbourhoods under renovation).

The first workshop on the development of disused railway sites and the creation of multimodal interchange hubs took place in Algiers at the end of April 2018, bringing together, in particular, teams from the Ministry of Transport and its operators from the Algiers Metro Company (Entreprise Métro d’Alger – EMA) and the National Railway Transport Company (Société Nationale des Transports Ferroviaires – SNTF), European experts and AFD representatives.

Collaborative workshop on the renewal of existing urban fabrics

Algerian cities abound with diverse architectural heritage: stunning houses from the Ottoman era, outstanding buildings from the Napoleonic period, typical 1960s and 1970s structures, suburban districts and social housing complexes. In recent years, these urban areas have deteriorated rapidly. It is estimated that over one third of the buildings in Algeria are in a dilapidated state. Urban communities are therefore at risk of losing their exceptional heritage and precious living space in a country that has been striving to address its housing deficit for several decades.

To turn things around, the Algerian Government decided to launch a programme to regenerate old districts. This is a first in a country that for a long time has focused its housing and urban planning on mass housing construction, mainly through new expansions on town peripheries. A decree adopted in 2016 established an initial framework for the programme. 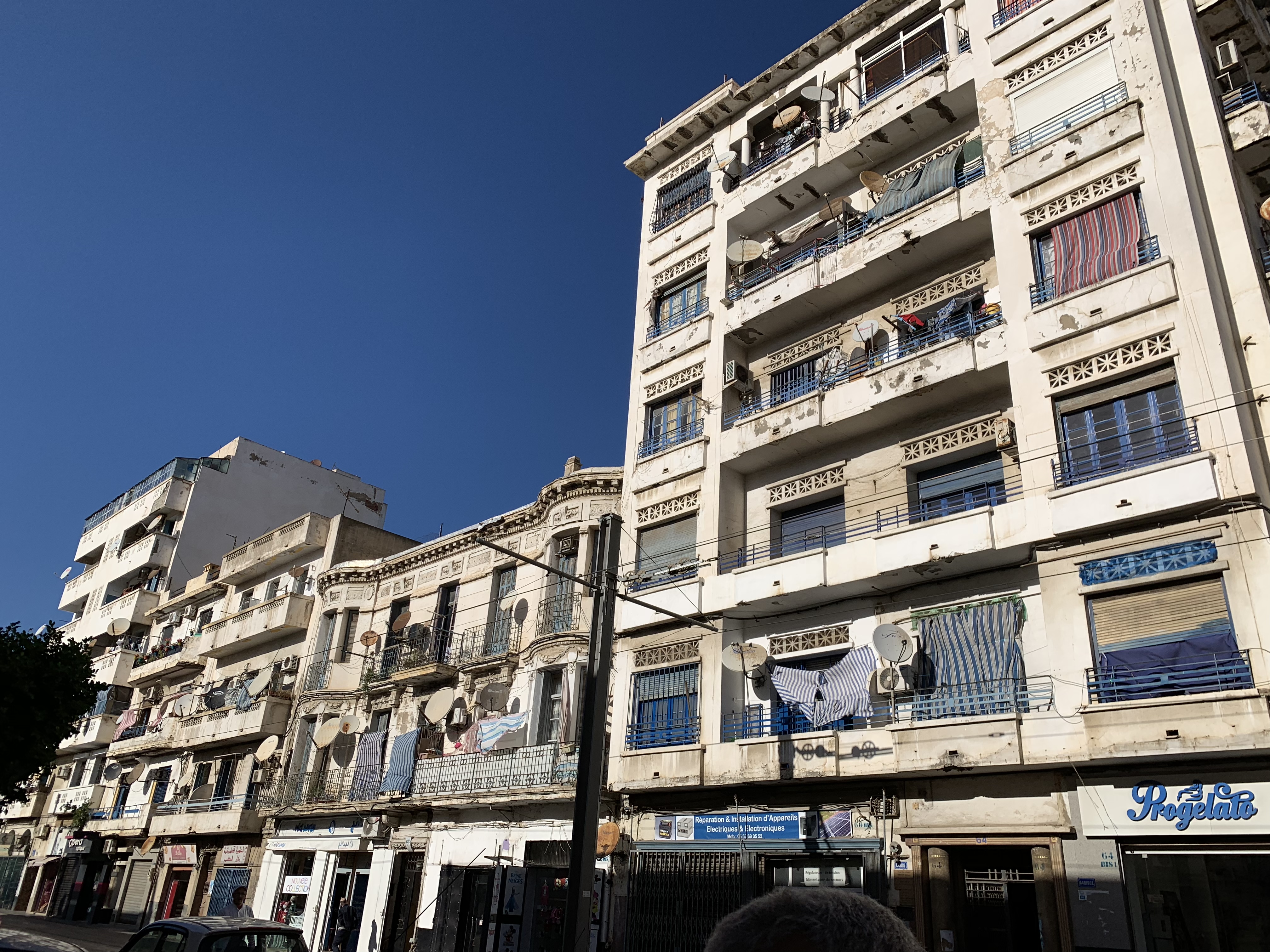 Old urban fabric in the municipality of Hussein Dey, Wilaya of Algiers
©ID&S, for AFD

To support the transition to the operational phase, Agence Française de Développement (AFD) organised under the Urban Projects Finance Initiative (UPFI) a three-day collaborative workshop with the Algerian Ministry of Housing and Urban Planning and Affairs at the end of November 2018. This event brought together representatives from key Algerian organisations for the rehabilitation of old urban fabric: the Ministry of Housing and Urban Planning and Affairs, the National Urban Planning Agency, State Property Services, the Wilaya of Algiers, several real estate development and management offices, the National Housing Fund, the Property and Housing Improvement and Development Agency, the National Study and Applied Research Centre for Urban Planning, the National Building Inspection Organisation, the National Integrated Study and Research Centre for Construction and the National Agency for the Development and Rationalisation of Energy Use. The international experts who contributed to this workshop came from the National Urban Renewal Agency, the City of Paris, the local public planning company of the European Metropolitan Area of Lille “La fabrique des quartiers” and the ID&S consultancy firm. AFD’s head and local offices, representing UPFI’s Steering Committee, participated in the three days of exchanges and deliberations.

The workshop was organised around exchanges of experience between Algerian operators and international experts. It also covered work on two Algerian sites, located in the Hamma-Hussein Dey district, which could host a first pilot project for the renewal of old urban fabric. In this way, the main issues were addressed: the scope of urban renewal operations, programming and the structuring and coordination of the contracting authority and the project design engineers to be engaged (technical, architectural, urban, social, financial, etc.).

These three days of collaborative work made it possible to compare French know-how with Algerian experience in the area of urban renewal. They confirmed some convergence in approach: renewal is not simply a means to safeguard, conserve and upgrade buildings; it must be a fully-fledged urban project offering a future vision of the targeted districts and suburbs. A renewal project must be a driver of change, setting in motion the material transformation of housing and public spaces, the revitalisation of economic and social life, commercial and cultural enhancement, and significant and sustainable improvements to the living conditions of inhabitants. 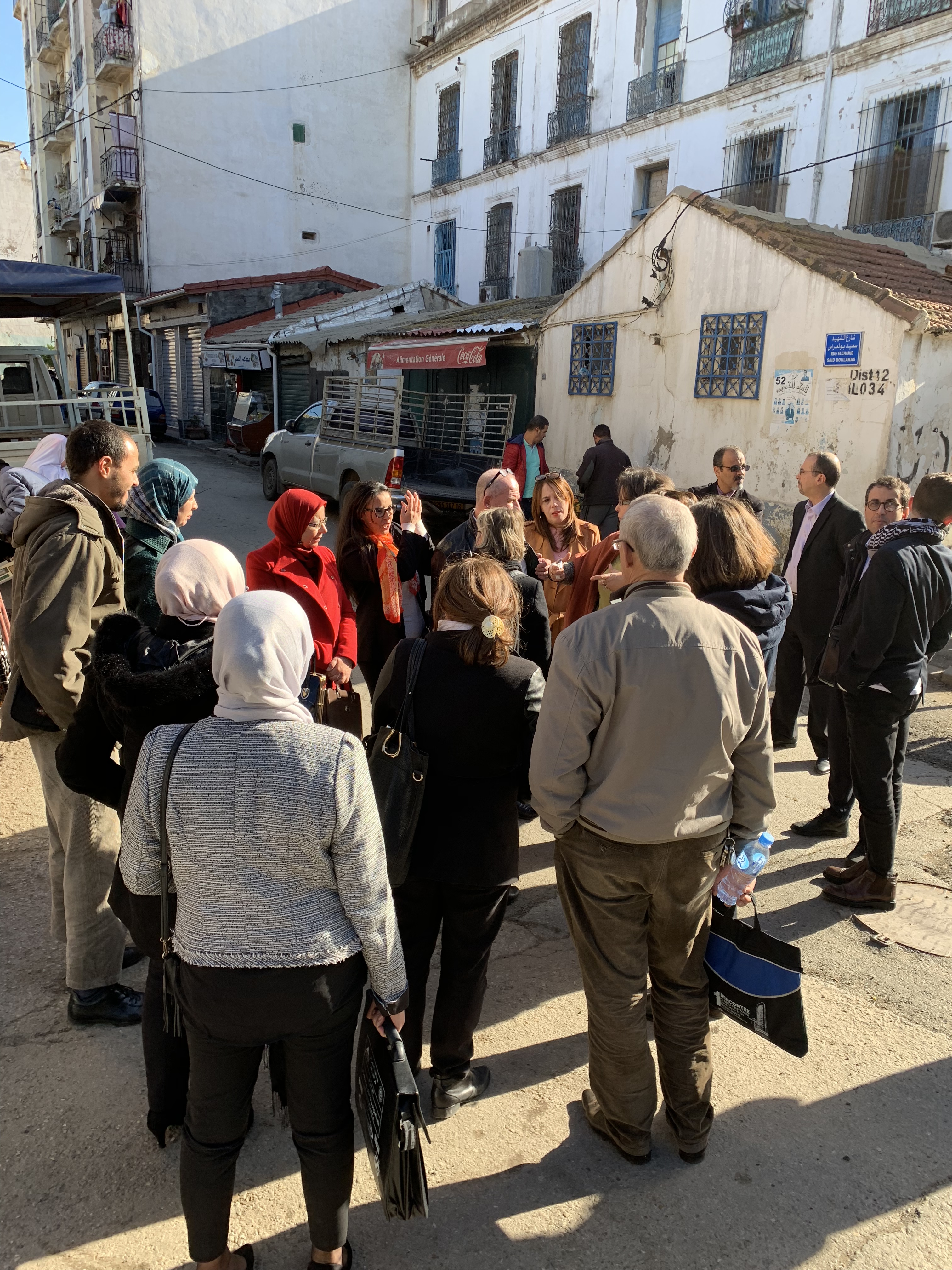 Collaborative workshop on the renewal of old urban fabric, November 2018
©ID&S, for AFD

In November 2018, the second collaborative workshop on the renewal of dilapidated urban fabric took place in Algiers. It brought together representatives from key Algerian organisations for the rehabilitation of historic urban fabric: the Ministry of Housing, Urban Planning and the City, ANURB, State Property Services, the Wilaya of Algiers, several real estate offices, CNL, AADL, CNERU, CTC, CNERIB and APRUE. The international experts who contributed to this workshop came from the National Urban Renewal Agency (ANRU), the City of Paris, the local public planning company of the European Metropolitan Area of Lille “La fabrique des quartiers”, and the ID&S consultancy firm. AFD’s head and local offices representing UPFI’s Steering Committee, participated in the three days of workshop activities. The workshop enabled the participants to examine the issues and challenges associated with urban renewal operations, e.g. the technical arrangement and planning of operations, the structuring of the contracting authority, the financial model for this type of operation, and the specialist skills required.