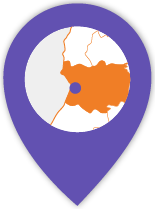 The modernisation of Greater Agadir’s public transport network rests on the creation of a Bus Rapid Transit (BRT) line, which will be both efficient and environmentally friendly, and the creation of a Local Development Corporation responsible for the management of urban mobility. The whole of this innovative project is supported by the Urban Projects Finance Initiative – UPFI.

With one million inhabitants, the city of Agadir is the main coastal resort of Morocco. At the centre of an expanding living area, its thriving tourist and economic attractiveness now requires a sustainable and efficient transport network.

In the face of these challenges, the Greater Agadir Urban Cluster has developed new strategies for urban mobility and development.

Created in 2015 under the framework of Morocco’s new law on institutional governance, this inter-communal establishment brings together Agadir and eight other municipalities: Inezgane, Dcheira, Ait Melloul, Lqliaaa, Dragua, Temsia, Taghazout and Aourir. Greater Agadir now has responsibility for urban mobility across this territory and is therefore developing a proactive policy for the renovation of its public transport network, with the support of Nantes Métropole and Semitan, its historic partners in the field of transport management.

The Bus Rapid Transit (BRT) system ensures a high frequency of buses travelling on reserved lanes while facilitating a low floor access for people with reduced mobility. This system, with tickets sold in stations, will link the fishing port to developing housing districts, serving many hubs of activity such as the commercial and administrative city centre, the souk and the university.

Running fifteen kilometres along a North-Southeast axis, this priority BRT line is the first step in a network of dedicated public transport lanes across the territory of Greater Agadir.

The aim of this project is to provide a public transit service that meets the requirements of reliability, consistency, frequency and safety, thereby reducing the number of passenger vehicles in the city centre, while encouraging a form of mobility that is more respectful of the environment. It will also be an opportunity to set up commercial hubs along this first Moroccan BRT line and thus revitalise neighbouring public spaces. This 15-kilometre stretch is the first step towards the creation in the medium- and long-term of a network of dedicated public transport lanes throughout the Greater Agadir region. An urban mobility plan has been studied in parallel, and envisages in particular the implementation of a second BRT line. 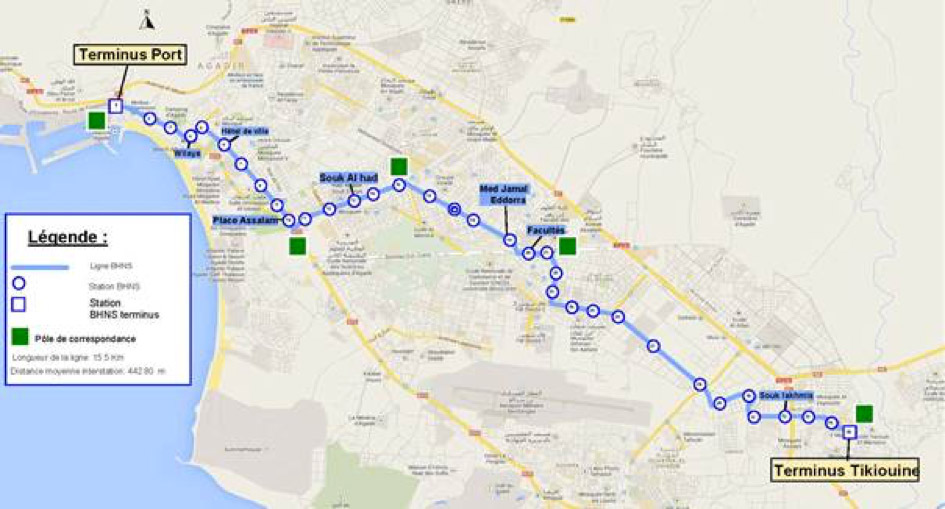 Greater Agadir wishes to have only one operator in charge of the public transport network, in order to facilitate contractual management and fare integration. ALSA, the Spanish company exclusively operating the existing traditional bus network that covers Greater Agadir, has expressed interest in the BRT project.

The environmental and social impacts of the implementation of the BRT priority network were analysed between September 2012 and April 2014 under the framework of feasibility studies subsidised by the Fund for Private-sector Aid and Studies (FASEP). This research, carried out on the territory of Greater Agadir along a 10.4-km stretch, allowed an analysis of displacements, and the definition of operational, technical, economic, financial and institutional aspects of the project.

On the basis of this study, and with a captive demand for the integration of the main mobility hubs such as the souks and universities, Greater Agadir decided to extend the BRT route as far as the developing neighbourhoods of Tikiouine, extending it to a total length of 15 kilometres, running mostly within the municipal boundaries of Agadir and briefly through the municipality of Dcheira.

Rethinking urban mobility, achieving the implementation of BRT and, more generally, managing transport and mobility for the cluster of municipalities is a complex task for which Greater Agadir has decided to create a Local Development Corporation (LDC). The creation of an urban mobility LDC, the strategic planning of mobility with the adoption of an Urban Travel Plan, and the inter-municipal nature of the approach mark out the Agadir BRT as an innovative project. In this respect, the Moroccan State could provide dedicated financial support.

Due to its complexity, the preparation of the UPFI-Agadir project for its third UPFI phase of implementation required the conduct of two technical assistance missions.

The institutional aspects were grouped together in a first mission launched in March 2015 and extended in June 2016. Led by one of the consulting firms consortia of the UPFI framework agreement, this component covered the creation and operation of the Local Development Corporation, a recent management model for Morocco, allowing the management of inter-municipal urban mobility on behalf of the local authorities.

The second component aimed to update the Agadir BRT feasibility study to the new 15-km option, optimising its technical, economic and financial aspects. Conducted from May 2015 to October 2016, the update of this study enabled the validation of the initial assessment in order to launch detailed preparatory studies.

The last stage was the analysis of the funding and the setting up of the project, corresponding to the third phase of the UPFI process. AFD financing was granted in addition to other sources of funding (Greater Agadir’s capital, subsidies from the Moroccan government, FART: fund to support urban and interurban transport reforms and the Souss-Massa-Draa region).
It was thus possible to launch the project at the end of 2021.

In June 2016, the technical assistance mission to Greater Agadir was renewed in order to intensify the support provided to the project promoter in the creation of a Local Development Corporation dedicated to urban mobility and in particular the Bus Rapid Transit (BRT) project. Find out more about the Agadir BRT project.