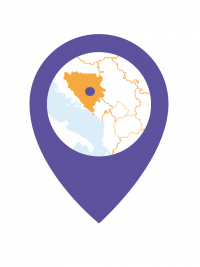 New project: New life for the University of Sarajevo campus

Over the last few years, the university has developed a strategy to consolidate the faculties into one main campus. Many of the faculties will gradually relocate to a high-quality campus environment.

One of the most important goals for the university is to integrate its educational and scientific research units and optimise the space for individual units and common facilities.

The project will result in comprehensive urban regeneration with all the necessary interventions in terms of service and traffic infrastructure. This includes the construction and refurbishment of roads, car parks and garages, public green parks, faculties, institutes and other facilities on the site, as well as the eventual reconstruction of the existing networks and systems.

Long-term solutions for the University of Sarajevo and its surroundings

The project will support the development of a University of Sarajevo campus in the wider city centre as a bankable investment underpinned by a long-term strategy and planning framework. The new campus will be located next to several administrative, cultural and business buildings, and is expected to house the library, the rectorate and several faculties.

This UPFI project supported by the EIB and AFD will provide the basis for a comprehensive urban regeneration project.

Bringing the past and future together

The former barracks around the perimeter of the future campus will highlight the site’s military heritage. During the 1992-1995 war, the site and buildings were heavily damaged, but several barracks have since been renovated and are now used by the University of Sarajevo and the National Library. The university campus, located at the former Tito Barracks, is currently home to five faculties, two institutes and additional student facilities.

Several target groups will benefit from this new project, such as current and future students, teaching and other university staff, residents of Sarajevo and the people of Bosnia and Herzegovina in general.

The expected positive impacts of the investments include:

The university campus is centrally located along the city’s main transport backbone, close to the central railway and bus stations.